And now, for your listening pleasure, we present ​Episode Three of
​Doc Danger and the Danger Squad: Radio Edition!
Episode Three is available on multiple streaming platforms!
Anchor   |   Google Podcasts   |   ​Overcast   |   Pocket Casts   |   RadioPublic   |   Spotify   |   YouTube
Donate Now!
"Tune in on Thursdays, true-believers, and follow the adventures of Doc Danger –
and MOT – as they fight against evil forces in the universe."
~Gwen Rice, GwendolynRice.com

"How to combat the evil that results from a failure of imagination?
Why, with an old-fashioned and endlessly imaginative radio play, of course.”
~Mike Fischer, Mike's Picks
Synopsis
When we last left our heroes, Professor Z was on the brink of harnessing the power of the Gem of Zavvenu to re-order the universe!  But luckily for the Squad, the Kid snatched the gem at the very last second and hid it in her hat.

Back in the “real world”, the Kid revisits Breathtaking Tales, but something isn’t quite right:  while she previously had no trouble imagining the magazine’s fantastic scenes, she now has great difficulty picturing them.  Her reverie is interrupted by her Mom and Aunt Dawn, who chide her about reading a magazine they consider “trash”.  The Kid notices a striking physical resemblance between Doc Danger and Dawn, but is struck by a glaring personality contrast: whereas the Doc is courageous and independent, Dawn is wrapped up in her relationship to the exclusion of all else.  The same goes for her sister, Libby, who possesses the intelligence of the Lady in Black, but slings her words with much less care.

Mom brings the Kid to ad agency Channel Z for Bring your Daughter to Work Day, where the observations continue: Mom’s supervisor, Sal, is as confident and capable as Satellite Sally, but caves under the slightest pressure from the head of the agency, Mr. Zachary; and unlike Jesai of the Jaguars, Mom’s co-worker Jessie never misses an opportunity to stab a friend in the back.  The Kid is perplexed by these contradictions, but when the agency’s jingle writer, Bob, makes an offhand comment about Channel Z’s revenue stream (Z + revenue= Zavvenu!), she puts it all together: Professor Z is inhabiting the real world in the guise of Mr. Zachary, somehow continuing to harness the power of the matter phase modulator to make everyone’s lives boring!
Join us next week for more action, adventure, and the final installment of Doc Danger and the Danger Squad: Radio Edition!
Harper Navin (The Kid), Briana Rose Lipor (Dawn), and Melissa Anderson (Mom) in our 2018 production! 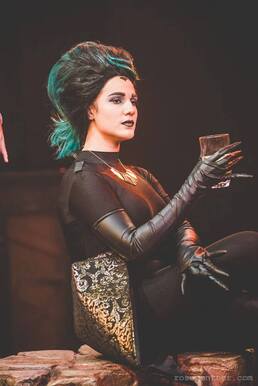 "Thinking of skipping out on the
final installment of Doc Danger, are you?

Until then, my lovelies!"
Ana Gonzalez as The Beetle Queen from our 2018 production!

Make a contribution in any amount to help us record four serial episodes and turn a Doc Danger radio play into a reality!
​100% of funds raised will go directly into the pockets of our dedicated performers!

We've come up with a few ways to say THANK YOU:
$100 - Sidekick 💥 Signed production photo from the cast!
$50 - Space Cowgirl 🚀 Link to exclusive outtakes reel!
$25 - Member of the Danger Squad ⚡ Link to original cast album!
🎧 All gifts over $25 will be recognized with a link to our original cast album once it is fully mastered. 🎧